Last weekend my wife and I found ourselves without our two children. In our newfound freedom, we went to a movie together, had supper together, and did some shopping together. It was a breath of fresh air. Before we decided to go home, however, we decided to make a quick stop into Toys-R-Us.

And so, after a bit of browsing, I decided to head on over to where the board games are located. I saw many of the classics that I enjoyed as a child and some newer additions. I felt like a kid in a candy store; I love board games. But as I stood there looking at all the different titles, I noticed something peculiar and decided to take a picture of it. It was just plain out of place.

Have a look below. 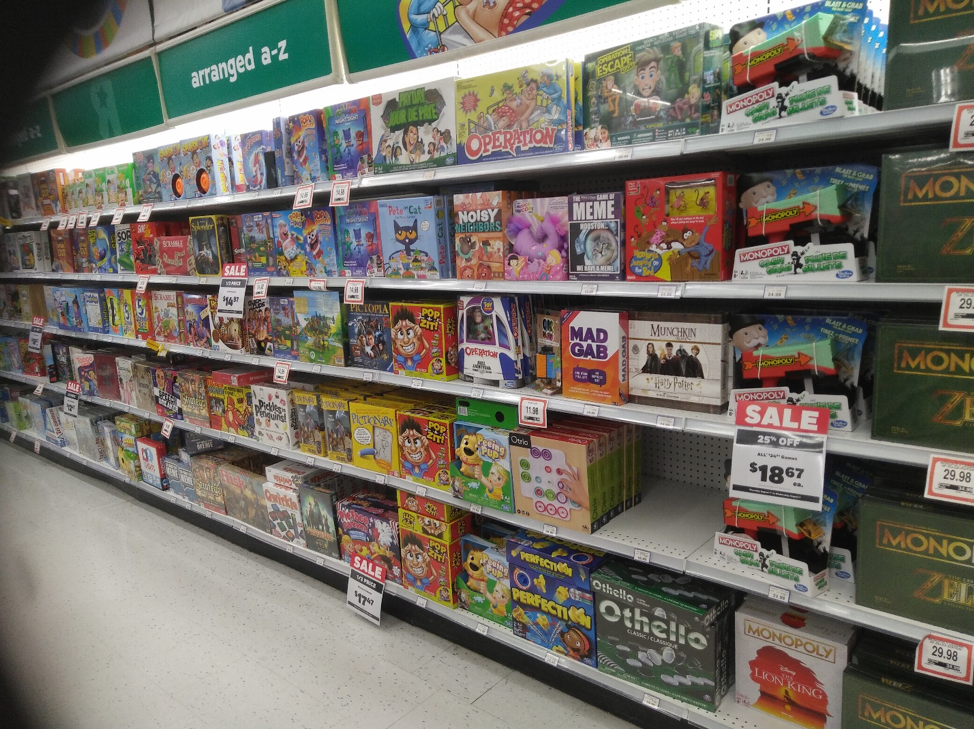 Every row is packed with board games - most to the edge. There’s Monopoly, Othello, Perfection, Mad Gab (and even a game that focuses on popping zits!). If you look closely you'll notice an entire row that's devoid of any games

Seeing this I thought to myself, “wow, must be a popular game! Whoever the manufacturer is, knows what they’re doing.” Curiosity grabbed me - I had to know! And so I looked.

In that moment I was overcome with sadness and dismay. I literally shook my head and sighed deeply.

Out of all the products offered, the Ouija board is the best selling. Irony at its finest. But ironic it is not.

This hit me because I too used to dabble in the occult. Seventeen years ago, before I became a Christian, my friends and I would pull out the ol’ Ouija board, light some candles and spend some time contacting the other side. We all knew what we were doing but the excitement of the unknown (and, in some ways, the forbidden) quickly pulled us in. A lot of it was extremely unnerving and overly surreal. And the thing is, is that we didn’t even buy a Ouija board – we made our own.

What we did (what I did) was both irresponsible and dangerous. And the more I think about it, the more surprised I am at how easy it was for outsiders to join us. Our group seemed to grow as the weeks went on. Anyway...

Praise God for His protection and opening my eyes. I shudder to think of what life could have been like if Jesus hadn’t of stepped in.

But this speaks volumes to the climate we live in don’t you think. I’m not saying that this activity is peculiar to St. John’s, Newfoundland because it’s not. It’s indicative to the climate of North America and, in fact, humanity in general. Humans are naturally drawn to the supernatural. Most people I know are seekers. They believe in something but aren’t sure of what. They recognize that the supernatural exists but aren’t too sure how to explain it. Even in my neck of the woods most people are very spiritual; most would even go so far to say that they are a Christian.

The fact of the matter is this: we live in a society where people are both spiritual and attracted to the forbidden, the unknown, the other side. People are desperate to know what happens when you die. In North America there’s no shortage of ways to do this: tarot cards, astral projection, automatic writing, seances, psychics, Ouija boards, spirit guides and the list goes on.

We live in a hyper-spiritualized world.

But the sad reality is that there are so many people who have access to the Bible and yet don’t know what the benefits and implications are of the Resurrection. I mean, it’s mind-blowing. The Bible has been scrutinized for almost 2000 years and it still stands the many, many, many tests of time. It is the #1 best selling book of all time. The last statistic I read was that there are over 100 million bibles printed every year in the U.S

Yet, people are more inclined to consult the realm of the dead instead of the author of Life. Its mind boggling how easy it is for someone to access a Bible and yet how many don’t.

And yet, we’ve been told. 1 Corinthians 15 is a fantastic chapter that describes the amazing blessings that are found in Jesus and the Resurrection. I preached on this a while ago.

And so I appeal to you, would you pray for us as we begin to minister to a people who are hungry, who are searching, who are seeking some form of the truth but yet in all the wrong places.

When the wind and waves begin to blow

Stepping out in faith

Standing in Awe of God

The Lord is our Shepherd

What's In Your Hand?