The Weight of Snow

I love how God allows us to see gospel messages in nature, and how He reminds us of His great power through natural phenomenon and weather.

I’m no stranger to natural disasters.

Back in January ‘98, I lived through one of the worst natural disasters in Canadian history. At the time, nearly 100mm of freezing rain fell over parts of eastern Ontario and southern Quebec. Millions of people were without power.

Somewhere around 2010 in southern Ontario, I was leading a conference call and noticed something was ‘off.’ It felt like I had a severe case of vertigo despite being sat down in my office chair. As I stood up, I noticed the lights and hanging plants swaying back and forth. We were having an earthquake (I think it was in the 3.0-4.0 range). I had never experienced an earthquake and, being on the fifth floor of our building didn’t help alleviate my concerns about the building coming down on us.

From 2012 to 2018, God blessed my family by allowing us to live in Australia for nearly 7 years. During our time there I’ve experienced catastrophic flooding, bush fires, drought and extreme heat (and spiders and snakes and cockroaches and rats). In fact, when my wife and I got married, nearly 400mm (1.3ft or ~16in) of rain fell the night before our wedding. It was the worst flooding that Southeast Queensland had seen since the 1970’s. As someone from Newfoundland I thought I had a grasp on what it meant to rain. Nope.

Since December 24th, 2019, St. John’s has had approximately 170cm of snow though the actual amounts vary from spot to spot; for example, on January 18th, Mount Pearl received 93cm. Kilbride, where I live, is fairly close to Mount Pearl and I’d guess that we’re somewhere in that range as well. I think we could generally say that the city received anywhere between 170-210cm of snow within 3 weeks. As my friends in Australia would say ‘far out, mate!’

It wasn’t rain, freezing rain, lack of rain or fire or tectonic plates that have impacted me the most. No, it was snow.

I spent nearly 8 hours Saturday, 8 hours Sunday and 4 hours Monday shovelling snow. My shoulders hurt, my back hurts, my arms hurt, my wrists hurt and even the joints in my fingers hurt (weirdly, even my eyes hurt).

This is what was waiting for me: 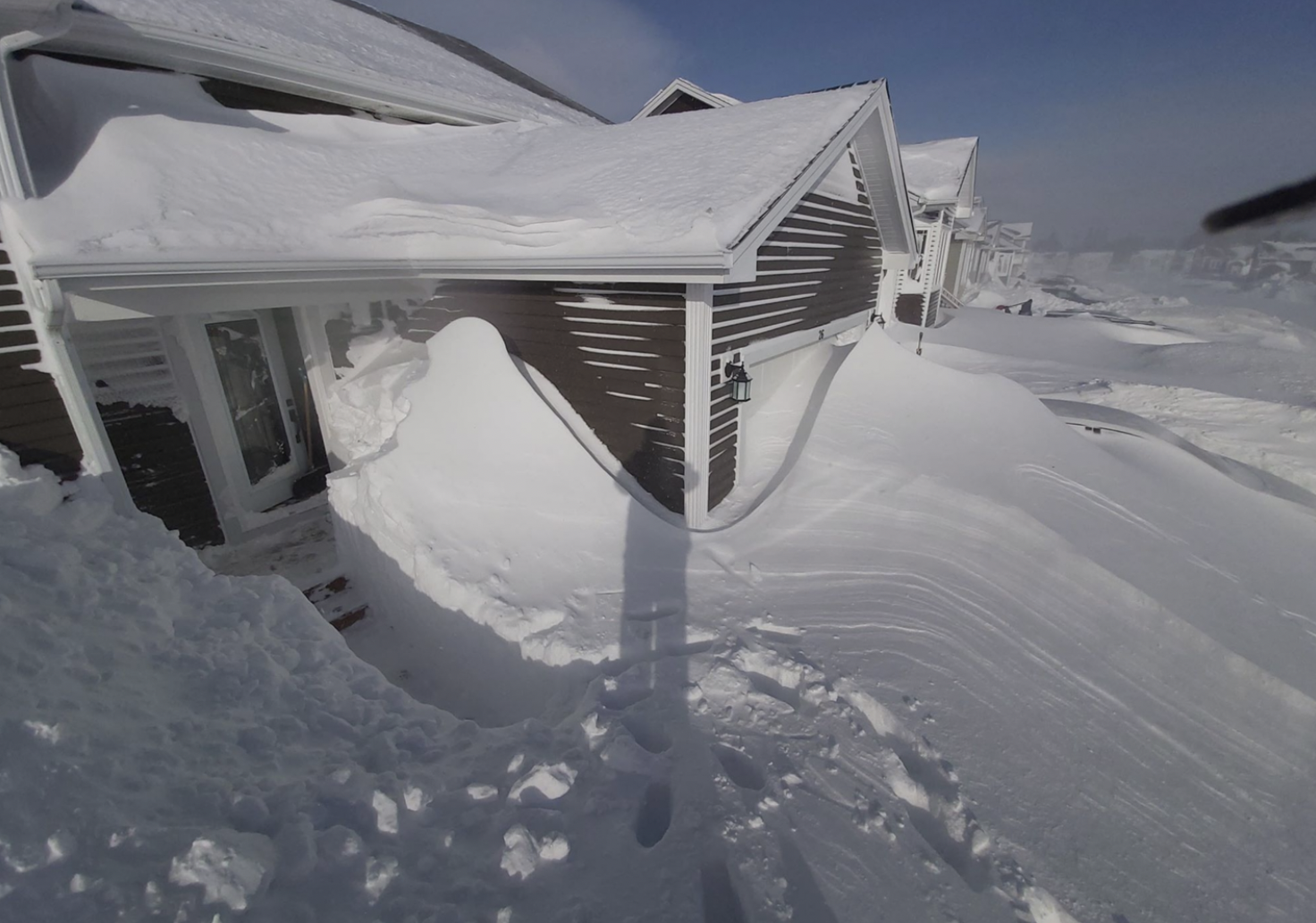 Now I’m not unfamiliar with crazy amounts of snow. St. John’s (and the Avalon Peninsula where I live) had nearly 700cm of snow during the winter of 2001. But this time was different. The sheer amount of snow – in one snowfall - broke me physically and mentally.

And then Sunday night we had 20cm more which turned to rain in the early hours of Monday. Not only did I have to contend with ~90cm of snow, now I had an extra 20cm on top of it weighted down by the rain.

Come Monday afternoon I literally had nothing left to give; I could have sat down with my head in my hands and wept. I was overcome by the elements and I felt like I was fighting a losing battle. While pictures can be found of people having a grand ol’ time and making the most of a not-so-nice situation, internally, I was a wreck. I can only imagine how many other Newfoundlanders could relate with me during this time.

But in the frustration of shovelling snow on Sunday afternoon, I heard the words of our Lord ring in my head:

“Come to me, all you who are weary and burdened, and I will give you rest. Take my yoke upon you and learn from me, for I am gentle and humble in heart, and you will find rest for your souls. For my yoke is easy and my burden is light.” (Mt 11:28-30)

Now I know this passage doesn’t fit my current context. Jesus isn’t talking about the physical burden of shovelling snow. But the words, nonetheless, were comforting.

But here’s the reality. Much like the snow that fell, many people here live under a religious system – under a burden – in which X, Y and Z are required in order be in communion with God or to spend an eternity in His presence. Much like the yeast of the Pharisees and its religious burden 2000 years ago, people on the Avalon Peninsula, unknowingly, are also under a burden of religiosity. The only difference is that they’re unaware of it.

They don’t know the gospel, or they do, but it hasn’t “penetrated as far as the separation of soul and spirit, joints and marrow” (Heb 4:12).

And so, through the amount and weight of the snow, the Lord reminded me, yet again, of this prevailing issue here in my neck of the woods.

The sin and weight of religiosity is heavy and thick.

Much like how my neighbours came and helped shovel out the snow in our driveway, the atmosphere of religiosity can’t be removed in our own strength. It will only be through our prayers and supplications (Phil 4:6) and an act of the Holy Spirit that the winds and landscape can begin to change in Kilbride.

Would you pray for us and with us that the Lord would bless Kilbride Community Church, and indeed Mile One Mission, as we strive to bring the gospel message to a neighbourhood that is very much blanketed in the weight and magnitude of prevailing sin and religiosity.

Praying for you brother.

When the wind and waves begin to blow

Stepping out in faith

Standing in Awe of God

The Lord is our Shepherd

What's In Your Hand?