Snowflakes, shovelling and crowds oh my!

Friday, January 17, is a day that Newfoundlanders will not forget. I had gotten up early to bring my wife, who’s a nurse, to work. We knew the storm was coming and she was much more comfortable with the thought of me picking her up, than her driving home in the blizzard. She was supposed to work a 12 -hour shift, but by 11AM, the city had called a state of emergency. We had no idea if she would get home or not, as is the situation for any essential worker.

Thankfully, I was able to get out of our driveway around 1:30PM to pick her up, as they were letting some staff leave if they had a ride. It was actually the worst thing I have ever driven in, and I have driven in a lot of storms. I have never seen so much snow and wind at one time.

When we woke up Saturday morning, the snow had stopped, but the wind was still gusting around 80-100km/h. After the wind had died down, the shoveling began. Our side of the street was lucky, as you can see below. The wind had blown most of the snow across the road into the yards and driveways of our neighbors. However, the snow that was in my driveway from the plow was rock solid. We all had our work cut out for us. 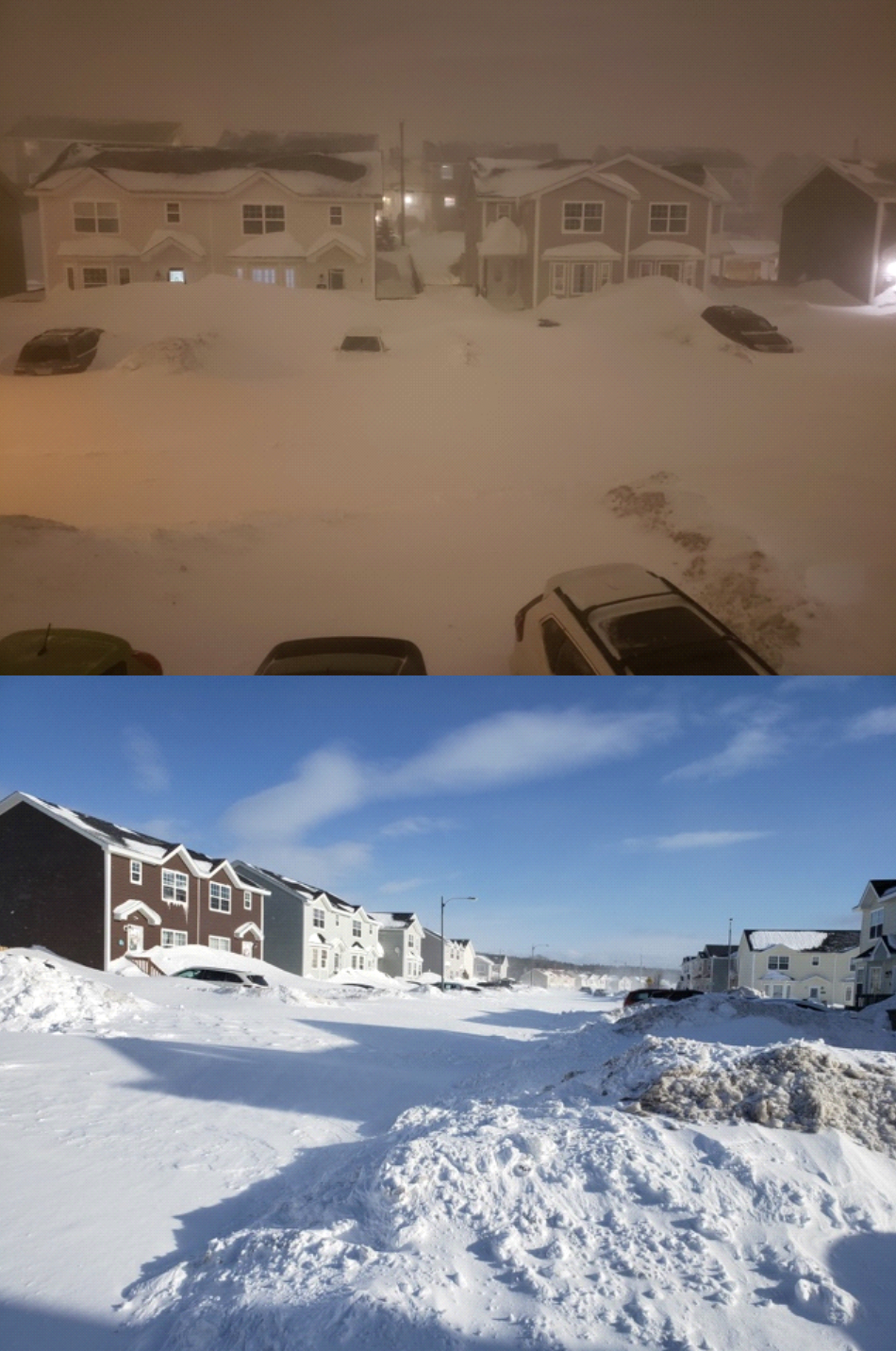 The plow made one cut through our road, and as I sit here writing this, we haven’t seen the plow since. This should give you an idea of how much work has to be done in the city. Our road is very narrow and only has room for one-way traffic. I’ve encountered other vehicles coming towards me a couple of times and have had to pull into someone’s driveway to make room.

In the midst of this, there are numerous stories of neighbors helping each other and the famous Newfoundland spirit of not giving up. I was even able to help a retired lady on our street. We had a wonderful conversation about our lives, and I was even able to mention where I worked and what Mile One Mission was. She half-joked that maybe I could start a church where we live. You never know, Sharon, you never know.

I’ve helped other neighbors and have had shorter conversations with them. I pray that these will just be seeds that help me grow relationships with them and will allow me to share the gospel. Most of the people I’ve come across are in good spirits, despite not having been able to leave their houses for a number of days.

Even when the grocery stores opened from 10-6PM on Tuesday, day six of our state of emergency, people were very kind and patient. When we got into the store, all of the carts were taken. A lady was walking off with the last children’s cart, the small ones with “Shopper in training” on them, because it was all that was left. My three-year-old daughter, who was with us, began to cry because there was no cart for her.

This lady stopped and gave the cart to us and went into the store without anything to put her groceries in. I was, and still am, very grateful to her. We knew it was going to be a long time in the store, and to start it off with a crying toddler would have quickly worn our patience thin. So, whoever you are, thank-you for giving my daughter that last cart.

It’s storms like these that draw people together. It brings out the good in us and opens our eyes to the fact that life is not just about us. Sure, there were plenty of moments where people were rude, angry, and downright mean, but they’re far outnumbered by the good.

Are we still a group of people who are sinful? Absolutely. A lot of people were concerned about when they were going to get more beer and smokes. That was their main concern, and then they got upset if others “judged” them and called them out on the ridiculousness of their concerns. We are still sinful, despite the good we may have done this week.

Pray for us here in St. John’s, Newfoundland. Pray that we are drawn closer, so as to support one another and share the gospel. And pray for our city and its essential workers. Although I was able to get my wife home, some nurses have worked up to 60 hours. And finally, pray that in the midst of this cold season people’s hearts will be warmed and drawn towards God and His work. Let us not grow idle in this time.

The Inspiring Life of Patrick of Ireland

Snowflakes, shovelling and crowds oh my!